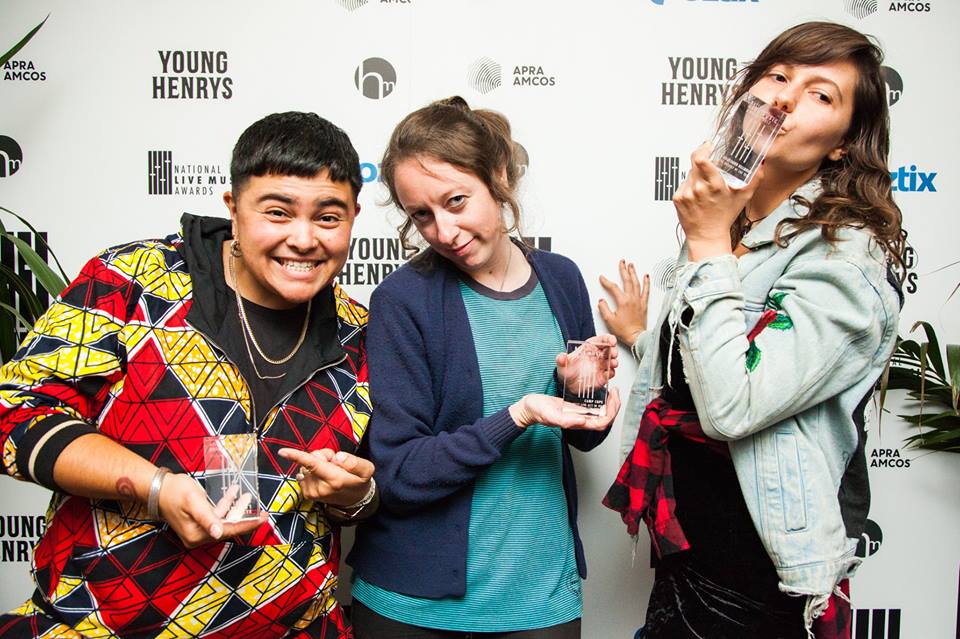 Tonight in Sydney, the third annual National Live Music Awards announced the nominees across 55 categories, and revealed the addition of the award’s “Hall of Fame” equivalent, detailing their plans to induct a legendary Australian band as the award’s first “Live Legends”.

The band in question will be announced closer to the 6th December event, and will see a special presentation looking back at their career, accompanied by a very special performance from the group at Brisbane’s Triffid, where this year’s Gala Awards Night is being held.

Leading the list of this year’s nominees are Camp Cope, who last year walked away with three trophies, and this year lead the pack with six nominations. This includes for Live Act of the Year presented by APRA AMCOS, and the industry NLMA trophy, for their continued efforts in speaking out against venues and festivals who program problematic acts and don’t aim for a gender balance.

Cable Ties and Stella Donnelly – both of whom also won trophies last year in their home states – have five nominations each, with Cable Ties having the rare distinction of having every member of their band nominated for individual live musicianship.

Baker Boy, meanwhile, is making his debut as a NLMA nominee, with 5 nominations, including Live Act of the Year presented by APRA AMCOS and Best New Act presented by the official beer of the NLMAs, Panhead Custom Ales.

The Wollongong Festival Yours & Owls has four nominations, with its under 18s event being nominated in the All Ages Achievement (AAA) category – a category which also sees Adam Smith, the event’s director, receiving a stand-alone nomination. Their nominations are particularly timely with the NSW leg of the event being held at The Music Lounge, opposite Wollongong’s Rad Bar – which has been nominated for Best Live Music Venue of NSW presented by Oztix.

The All Ages Achievement (AAA) Award this year expands to every state and territory around the country, recognising the achievements of an individual, organisation, band/artist or event who has worked through the red tape and helped make all ages events happen in their state. Some States/Territories only have a winner which will be revealed on the night, others have five nominees announced today, with artists like Mallrat and Travis Dempsey of The Living End recognised, the latter for his work on the youth music programs in the City of Onkaparinga.

Director of the NLMAs, Larry Heath, said of the nominations, “This is without question the most diverse, exciting group of nominees we’ve ever had. We hope it shines a light on some great emerging talent that you mightn’t have heard of, while acknowledging the incredible work of well established artists, festivals and venues around the country. We can’t wait to celebrate the people who make the Australian Live Music Industry the best in the world on Thursday, 6th December.”

Also announced at the event, this year the awards will be making the People’s Choice categories more interactive than ever before.

Through the awards’ partnership with The Music Network, the public will be able to nominate their favourite Australian live act, and favourite Australian live voice, from today – Tuesday 2nd October – through to Tuesday 23rd October. On the 24th, the top ten will be announced and the public will have another three weeks – until November 13th – to vote in each category. Everyone who nominates or votes will go in the draw to win a double pass to the awards in their State or Territory as well as additional prizes to be revealed over the coming weeks.

The awards also announced plans to pay tribute to beloved Melbourne photographer Ros O’Gorman, with a special exhibition, upstairs at The Old Bar in Melbourne on the night of the event. A selection of her work will be on display alongside some of the nominees of this year’s “Best Live Music Photographer” category – which sees Jess Gleeson, Kane Hibberd, Lauren Connelly, Michelle Grace Hunder and Naomi Beveridge nominated in what is the award’s debut.

With the exception of the two public voted categories, National Live Music Awards are voted on by 100 judges nationally, who are elected by the award’s 11 national board members.

Lineups for all events will be revealed over the coming weeks. Stay tuned to nlmas.com.au and our various media partners for ticket giveaways and more details about the events. Those who wish to volunteer for the event in their State or Territory are encouraged to do so at the official website.

The National Live Music Awards are presented by the official ticketing partner of the NLMAs, Oztix and the official Beer of the NLMAs, Panhead Custom Ales with additional national sponsorship from APRA AMCOS, Jameson and Sandberg Guitars. State and Territory Sponsorship has been provided by Music NSW, City of Adelaide and the Queensland Music Festival. Media Partners for the NLMAs are The Music Network, 4ZZZ, RTR FM, Edge Radio, 2SER, Foldback Magazine, SYN Media and Radio Adelaide. Additional Support has been provided by Audio-Technica and Netgigs.

And now, here are the nominees…

International Live Achievement: Band
Recognising the live achievements of an Australian band outside of Australia’s borders

The NLMA
The National Live Music Award, or “The NLMA” is our annual trophy given to an individual or an organisation who have made a difference in the live music scene, particularly over the last 12 months.

Camp Cope – For speaking out against venues and festivals who program problematic acts and don’t aim for a gender balance.

Girls Rock! Australia – A national network of girls rock camps. Each program is independently run by a team of musicians and educators passionate about empowering girls, trans and gender-diverse young people through music education and mentorship.

Helen Marcou – Helen’s continued involvement and leadership in supporting live music via the SLAM and Safer Venues activities has been so successful that her ideas have been highly influential across the entire country, not just in Victoria.

Milk! Records – Not since Michael Gudinski established Mushroom in 1970’s has there been such awareness raised and conversations started re Independent vs major release/distribution, and this is all thanks to the amazing Jen Cloher, Courtney Barnett and their team at Milk!

2018 “Live Legend” Inductee
TO BE ANNOUNCED

AAA – All Ages Achievement presented by Music NSW
The AAA Award recognises the achievements of an individual, organisation, band/artist or event who have worked through the red tape and helped make all ages events happen in our state and/or provided opportunities for Under 18s.

Live Act of the Year
A. Swayze & The Ghosts
Christopher Coleman Collective
Luca Brasi
The Native Cats
The Sleepyheads

The National Live Music Awards will be held on Thursday 6th December 2018.

Each satellite event will have the 5 state/territory awards handed out, with full live performances, DJ sets and special guests. Door prizes from Audio-Technica will be handed out at every event. Tickets are available now through the NLMA’s official ticketing partners Oztix. $5 from every ticket goes to Support Act.