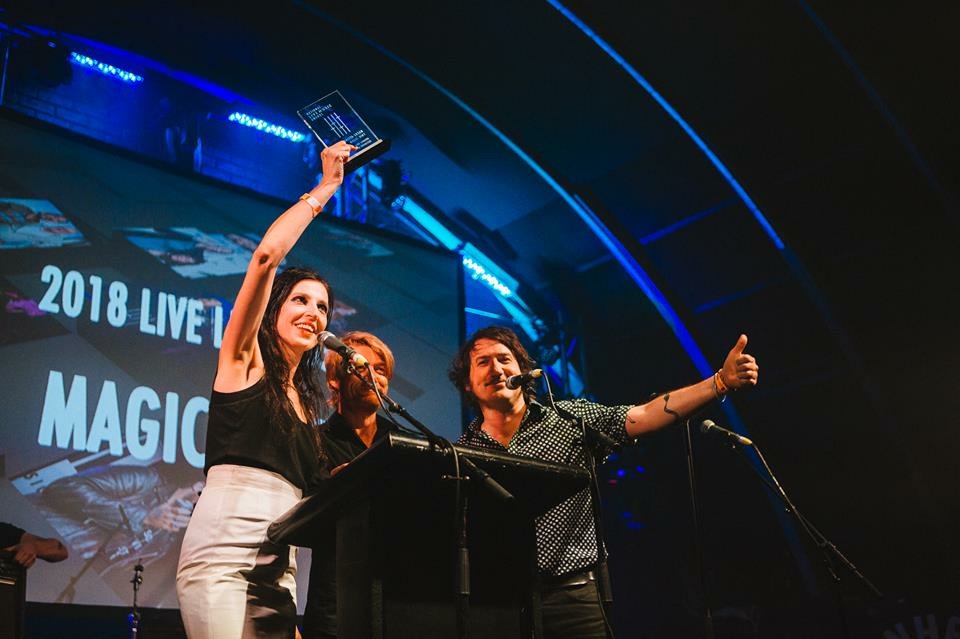 At eight simultaneous events around Australia last night, attended by over a thousand punters nationally, the National Live Music Awards (NLMAs) gave out more than 60 awards, recognising the best musicians, venues, events and industry in Australia’s live music scene, as Magic Dirt were inducted into the National Live Music Awards’ Hall of Fame as the 2018 Live Legends.

As they were inducted, the band took a moment to reflect on the fact that “these are the first awards we’ve ever won”, and relished the opportunity to reflect on their career, and pay tribute to the late Dean Turner ahead of their first performance in Brisbane in a decade, which was live streamed internationally thanks to Netgigs.

Stella Donnelly also took home three awards, including Best Live Voice in Australia and became the first solo artist to sweep the musicianship categories in their home State; taking both Best Live Act and Best Live Voice in WA. The only act to have ever achieved this was Electric Fields, who won both categories in SA in 2017, and this year took home their first ever National trophy, as they were named best Live Electronic Act in the country.

Gang of Youths added another two NLMAs to add to their tally; remaining unbeaten in the NSW Live Act of the Year category. The are the only artists to win the same category three years in a row.

They weren’t the only winners to defend their titles. BIGSOUND took out their third consecutive win as Best Live Event in Queensland, remaining unbeaten in the category. Dark Mofo, meanwhile, retook the title as Best Live Music Event in Australia, which it first won in 2016 (losing to BIGSOUND last year). Both BIGSOUND and Dark Mofo have now won four NLMAs over the last three years.

Other winning events included the Meredith Music Festival, which kicks off tomorrow, Splendour in the Grass, Spilt Milk, Darwin Festival, and A Day of Clarity in SA, which also won the award last year.

The Triffid, meanwhile, which saw Brisbane served as the home of the Gala for the first time, also enjoyed its third consecutive win as the best Live Venue in QLD.

The All Ages Achievement category went national this year, with Girls Rock! Canberra taking out the trophy in the ACT, while the overall organisation Girls Rock! Australia was recognised with the prestigious NLMA (National Live Music Award) for contributions to the industry.

In Victoria, Kate Duncan was acknowledged for her amazing work with The Push, and in Tasmania, Brad Harbeck for his work with the Tasmanian Rock Challenge. Hyperfest took out the award in Perth, who were in the news in recent weeks for having to sadly cancel their 2018 event. Voted on by the judges well before this news, the All Ages event was recognised for their importance in the WA scene and an incredible 2017 event.

The Cat Empire swept the People’s Choice categories, presented by The Music Network, winning both Best Live Act and Best Live Voice for Harry James Angus, having received thousands of votes from around the country. Angus joked that rather than a “Shark Attack”, the night seemed to be more of a “Cat Fight”, making reference to Amy Shark‘s recent domination at the ARIAs and multiple nominations at the NLMAs. Shark did take home Best Live Voice in QLD for the second consecutive year.

In one of the more emotional wins of the night, the late Luke Liang was named the best live instrumentalist in the country, paying respect to his incredible work within a multitude of projects over the years. His brother Liang Liang accepted the award following an emotional presentation from Jaguar Jonze.

Across the night, alongside the 60+ awards, there were also almost 30 live performances, including the legendary Magic Dirt, who closed out the night at Brisbane’s Triffid, in what was their first performance in the city for the better part of a decade. Other performances included Stevie Jean, RMJ, Timothy James Bowen, Pink Matter, David Spry, Neon Tetra, Bugs, Alice Ivy, Quivers, Cry Club, The Burley Griffin and many, many more.

Full details about the full run of events, and a full list of nominees, can be found at nlmas.com.au.

“The Sheddy”
Best Live Drummer of the Year
Jen Sholakis

VIC Awards
Presented by The SYN

Live Act of the Year: A Swayze and the Ghosts
Live Voice of the Year: Tyler Richardson (Luca Brasi)
Live Venue of the Year presented by Oztix: The Odeon Theatre
Live Event of the Year: A Festival Called PANAMA
All Ages Achievement: Tasmanian Rock Challenge (Brad Harbeck)

The National Live Music Awards are presented by the official ticketing partner of the NLMAs, Oztix and the official Beer of the NLMAs, Panhead Custom Ales with additional national sponsorship from APRA AMCOS, Jameson and Sandberg Guitars. State and Territory Sponsorship has been provided by Brisbane City Council, Music NSW, City of Wollongong, City of Adelaide and the Queensland Music Festival.